It was a frosty early morning and the sun was yet to peek its head above the the Waterberg mountains. We left Marataba Safari Lodge, South Africa, wrapped in thick blankets, full of anticipation as to what the day would bring.

There were fresh lion tracks close to the river, so fresh they were still wet from the lions crossing the water. As I rounded the corner I found two lionesses and their four cubs in the middle of the road! The cubs were full of life; chasing each other and pouncing on their mothers’ backs. Seeing lions is a special sight on any day but to see four youngsters so energetic and and so playful is truly a privilege. The cubs didn’t have a care in the world. They tumbled over each other, running back and forth, completely ignoring us. 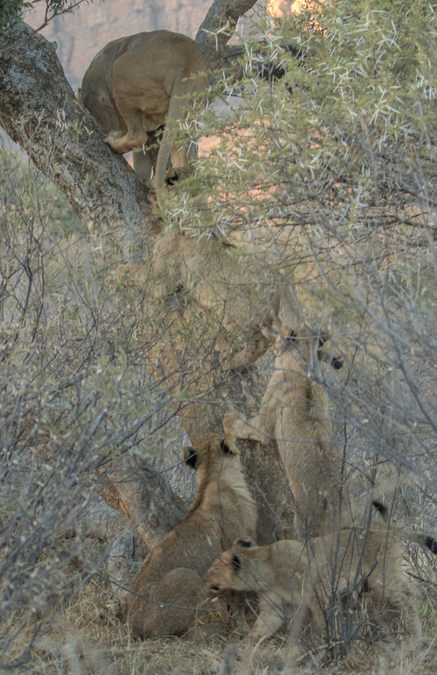 After a while the mothers decided it was time to move on. They called their cubs with soft short hums and slowly began to move off the road. I moved forwards hoping to get one last look at the family before they disappeared into the thicker bush and then to my utter surprise spotted one of the lionesses in a shepherd’s tree (Boscia albitrunca)!

Lions do not typically climb trees. Although quite capable of climbing up, they lack the elegance and nimbleness displayed by their leopard cousins when climbing down.

The lioness was precariously balanced in the fork of the tree whilst the four youngsters clawed at the base. It was fun to watch the cubs attempting to mimic her behaviour. Two of the them managed to climb a lower branch.

She didn’t stay in the tree for long as the other lioness had continued to move further into the bush. Her descent was exceptionally graceful (for a lion) and upon reaching the ground she was pounced on and chased by the four cubs. The family continued on their way and within moments were out of sight.