A true African drama has been playing itself out in South Africa’s Rietspruit Nature Reserve near the bushveld town of Hoedspruit and the Kruger National Park, and residents of Leadwood Big Game Estate (a private residential estate inside the reserve) have been on the edge of their seats, hoping that a tiny female cub will overcome enormous odds to survive.

Two lion cubs were recently born to lions introduced to Rietspruit Nature Reserve in June 2018, and the mother was doing a great job of hiding them from other pride members and from predators such as leopards, hyenas and pythons (as mother lions do for the first few months). BUT then the tiny female cub left her mother and brother to go walkabout with the three pride males who visited the den site for a few days. When the males left to go hunting the female cub followed them. She was only five weeks old at the time, and still totally dependent on her mother for milk.

After 10 days this tiny explorer was still hanging about with her giant male travel companions, and looking gaunt and weak. During that time, she had not been with her mother and so had no milk, and although she was seen at a giraffe carcass with the males it is unlikely that she ate any meat.

Lion cubs only start eating meat at about three months old, although there have been anecdotal reports of younger cubs nibbling on small quantities of meat. The tiny cub was seen drinking water on a few occasions.

Quite how she had survived to this point with no nutrition is a mystery. Considering that her constant desperate calls would attract hyenas and leopards, and her proximity to a giraffe carcass which was bound to attract hyenas, the odds were well and truly stacked against her. Hyenas and leopards regularly kill lion cubs.

The adult males were very attentive of her, often doubling back during their wanderings to make sure she was keeping up, but of course they could not provide her with the necessary nourishment. She was seen trying to suckle from the males, obviously to no avail. 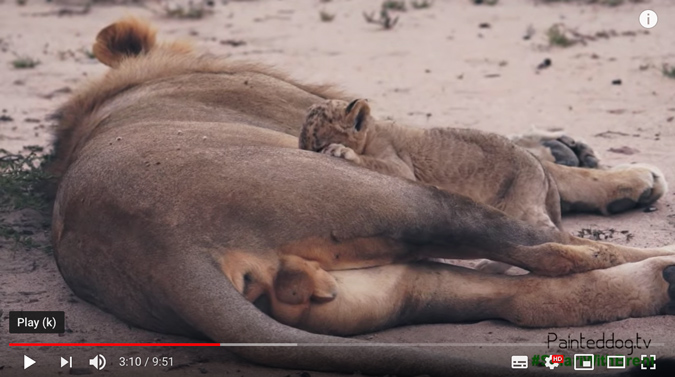 In the meantime, the mother was seen moving her male cub between dens in the dense riverine thickets some distance from the female cub, as they do to keep the location a secret from other predators. This too was reducing the cub’s odds of survival – finding her mother being her only chance.

Following the lion cub during this time were film-making crew Brent Leo-Smith and Wium Dornbrack of Painted Dog TV, whose four videos of this saga appear at the end of this post. The videos tell the story as it unfolds, and make for compelling viewing. Brent, who is a safari guide and presenter for Painted Dog TV, was concerned about how gaunt the tiny cub had become, after so long without nutrition.

He had this to say: “At first we enjoyed observing and filming the cub as she followed the big guys around, and cuddled with them whenever they rested. This was a unique situation, and we enjoyed making the most of the opportunity. But after a while she became hungry and weak, and started calling for food, and even tried to feed from the males. We then became stressed about the situation, and documenting her probable death was not easy for Wium and I. It was really tough to be following the cub and watching the sad saga unfold, hearing her call desperately for food, and yet having to simply observe, record and not get involved.” 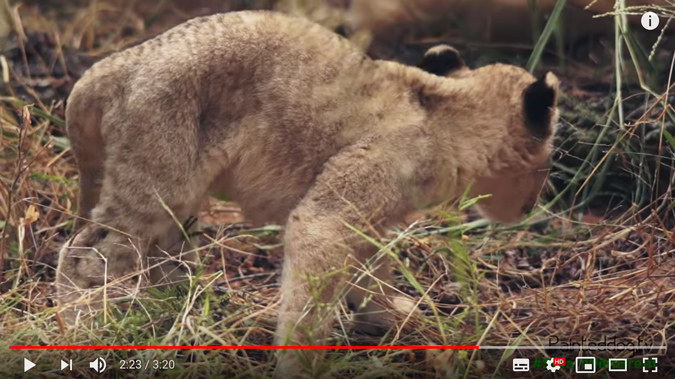 After 10 days had passed, and with the weakening cub looking increasingly gaunt and desperate, the decision was made by Rietspruit Nature Reserve to intervene. The plan devised was to attempt to get the males and mother lion together, and so allow the female cub to once again join her mother.

Meat from a culled impala (this being a fenced reserve, where culling is necessary to prevent over-population) was used to create two pieces of bait – one for the mother and one for the males. The lions followed their respective baits, and met as planned, but in the ensuing frenzy the female was chased away by the males. While the meat was distracting the adult lions, Brent and Wium went back to the female cub that had got left behind. Thinking quickly, they devised a plan to catch the cub and move her closer to the den where her brother was in hiding. After receiving permission via mobile phone from reserve management for this spur-of-the-moment change of plan, Brent called to the cub, imitating a lion contact call. 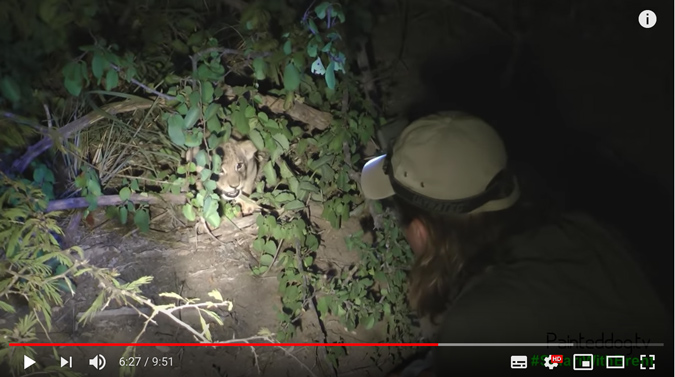 She approached cautiously out of the shrubs, and Brent threw a blanket over her, wrapped her up and placed her in a bucket usually used for dangerous snake relocations. 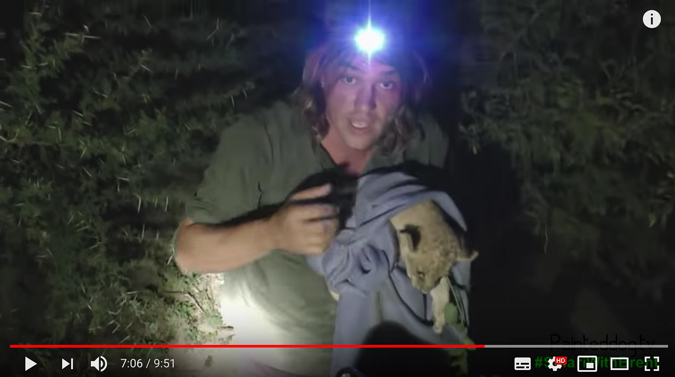 The intrepid film crew then dashed over to where the last known den site for the male cub was, and left the female in nearby shrubs. They then left the scene and went home for some much-needed sleep, hoping that the brave female cub would be re-united with her mother and brother, but fearing that the morning would bring bad news… 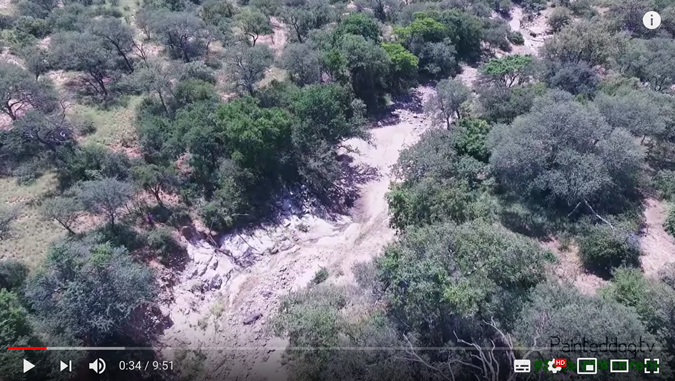 Before first light they headed back to the den site, and were delighted to see the wandering female cub back with her mother and brother. The size difference between the two cubs was obvious, and it remains to be seen if the female can overcome 10 days of insufficient nourishment at such a young age.

After enjoying watching the three lions reunited, Brent and Wium left them to themselves. 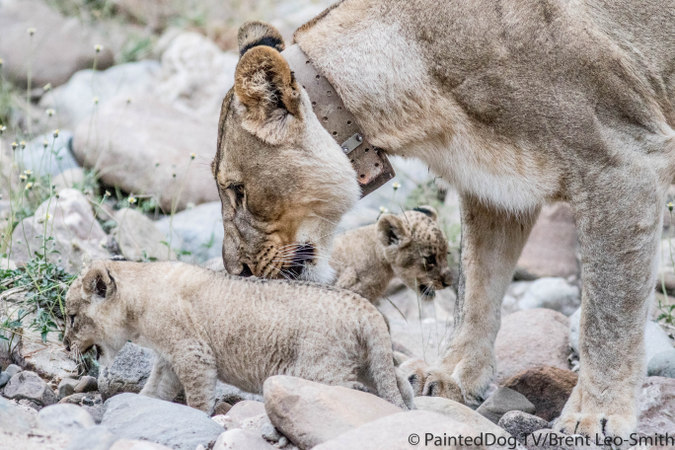 Kevin Leo-Smith, a resident of Leadwood Big Game Estate and conservation manager of Rietspruit Game Reserve, had this to say: “Wild lion cubs have a high mortality rate, and we usually do not interfere with natural incidents such as this, because it is important that nature takes its course. This is how nature determines which individual animals survive the rigours of life in the bushveld, ensuring that the species as a whole benefits by way of natural selection. In this instance though, we decided to make a one-off exception, and authorised the moving of the female cub to within a close proximity of her mother. This was a unique situation, truly extraordinary, and I have not found anyone that has heard of a similar story.

“Big cat expert Dr. Luke Hunter was totally correct in his analysis that this entire saga was due to an adventurous cub – his main point being that lions have personality. This cub proves his point in so many ways.  I would like to thank to Brent and Wium for their bravery, common sense and dedication.” 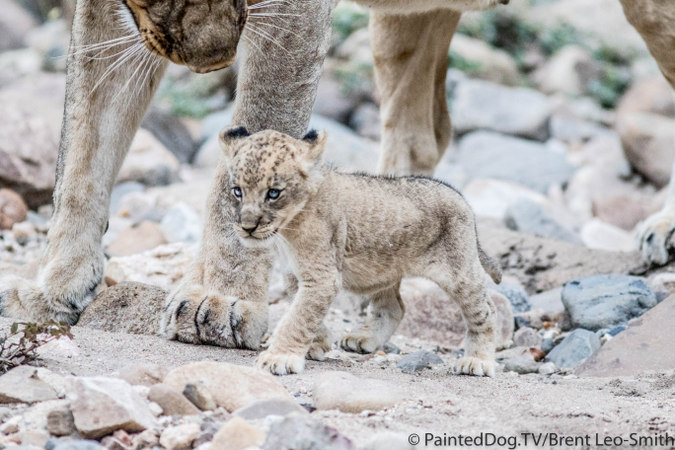