There’s no doubt that the drought that ended in November last year hit buffalo numbers extremely hard here at Sausage Tree Camp in the Balule Private Nature Reserve, South Africa. The drought accounted for a drop of some 50% in the Kruger National Park’s buffalo numbers so it’s easy to understand how numbers in the surrounding Greater Kruger reserves were also devastated.

We were certainly battling to see any buffalo at all on game drives, and the animals that survived were inevitably weakened and often diseased, meaning that predation – primarily by lions – increased exponentially.

But now there is good news as their population numbers are bouncing back after life-giving rains finally broke the drought! We now regularly see a herd of some 70 or 80 animals on our game drives, and there have been a huge number of calves born during the rainy season so that number is steadily increasing. 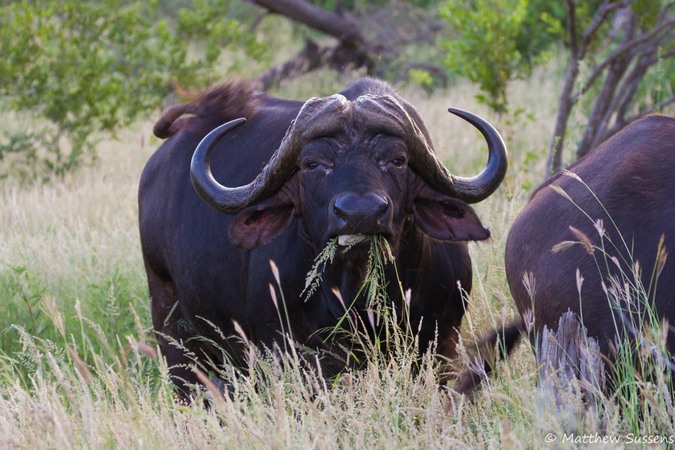 Buffaloes perform a critical role in an ecosystem in alleviating the pressure of ticks from other mammals. They carry a huge infestations of these parasites, providing much-needed sustenance to the red-billed and yellow-billed oxpeckers that are always seen hanging on to their hides, keeping these disease-bearing biters at bay. Without the buffalo, tick populations explode, negatively impacting the other animals they feed on to the point of killing them – literally bleeding them dry. We saw several incidences of tick-infested impala who had died as a result of anaemia caused by the ticks literally taking too much blood out of their system to allow them to recover the red blood cells and associated oxygen levels needed to survive.

Another important thing buffaloes do is fertilize soil through their dung. Yes, buffalo dung, though smelly, is extremely good for the earth, helping to restore much needed nutrients and nitrogen levels that in turn are needed to help seeds germinate and plants grow. So fewer buffalo means less fertile soil, which in turn compounds the effects of the drought. Thankfully, the surfeit of buffalo manure since the rains came has made this latest green season one to remember!

Of course, the buffalo is also a vital food source for our predators – lions, hyenas and leopards – so the increase in numbers is good news for buffalo-eaters, putting healthy red meat firmly back on the menu! 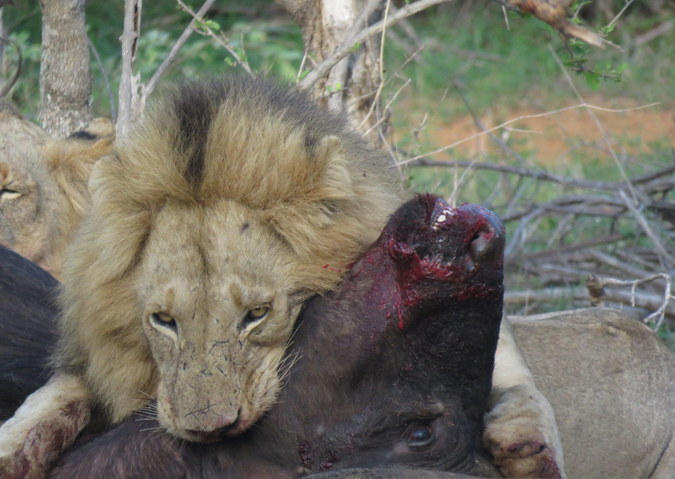 Lions, like those from our resident Takazile pride, use strength of numbers to overcome adult buffaloes, usually attacking from the rear in an attempt to get them off balance and bring them down. Hyenas use similar methods, usually singling out smaller, weaker-looking animals as their targets. Leopards, on the other hand, opt for a more patient and stealthy approach, attacking calves and then waiting for them to weaken and fall behind before closing in to finish them off.

However, hunting buffalo is far from easy for these predators, as they are famous for their defense of one another and will retaliate readily, chasing and charging down predators. Their horns are lethal, as are their hooves, and many an unwary lion has been fatally wounded in the resulting skirmishes.