When the billowing plumes of Atlantic mist part to reveal the enchanting Dorob coastline, expanses of vividly colored water sprinkled with thousands of lesser and greater flamingo appear in a mesmerizing kaleidoscope of color. Flying this section of coastline is in short, an aerial photographer’s and nature lover’s paradise and will take your breath away. Sinuous inlets and waterways meander across the mudflats of the large saltwater lagoon of Sandwich Harbor. Namib Naukluft. An artist’s palette, the colours of salt adorn the coastal flats in a profusion of crusts and ruddy blotches. Skeleton coast.

To the north of the Dorob coastline, brine pans line the shores in a display of color, shape and texture that leaves one’s heart racing with the ethereal beauty of it all. Further south a patchwork series of lime and raspberry saline lakes, edges encrusted with crystals, sparkle against a treeless landscape until they reach the shores of the Walvis Bay Lagoon. The cold Benguela current and its nutrient-rich waters, the commercial saline lakes and the Walvis Bay lagoon collectively made the area famous for the incredible profusion of birdlife it attracts each year. In this saline ecosystem, vast quantities of phytoplankton are produced which support other marine organisms such as algae and brine shrimp, food for many hundreds of thousands of resident and migratory birds including cormorants, terns, avocets and a profusion of shorebirds. An upwelling of nutrients from the sea floor provides sustenance for a psychedelic algal bloom on the Atlantic Ocean. Like a giant marine lung; turquoise bronchi branch out through russet alveoli bringing with them the nutrients and habitat required by vast flocks of lesser and greater Flamingo that grace these shores. Walvisbay Lagoon. Seeming to float on an ocean of pinks, coastal rock outcrops emerge from the brine ponds north of Swakopmund.

So how is it that these saline lakes display such gaudy colors? From lime green, clear turquoise to bright red these variations are caused by fluctuating concentrations of salinity and minerality and the various organisms that flourish in each. Cyanobacteria create the blue-green tones, and an algae called Dunaliella salina produces the rich pinks and reds. Brine shrimp rich in beta carotene are responsible for the rosy pink color of the flocks of flamingos that forage this watery wonderland. Serpentine streamers of pink stand out in vivid contrast to the dark shores of the Atlantic coastline.

Jay and Jan Roode – from their book AERIAL ART 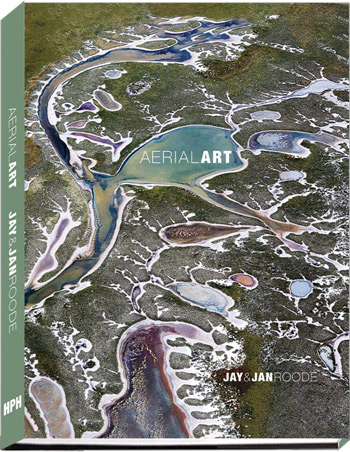