I was on my way back from dropping some guests off at Eastgate airport, which is just a short drive away from Kapama Buffalo Camp.  I was met with a terrific sighting of a big male Leopard, sleeping quietly on a branch of a Marula tree. When I returned to Buffalo camp, I arranged with my guests to leave earlier than normal, to see if he was still sleeping in the same spot. We nibbled on a few delicious snacks at high-tea and as 4 o’clock came around, we set off.  Unfortunately just as we set off I heard from a different guide that the Leopard had moved off, but that there was a female Leopard in the area as well. Knowing that there was a female close by, meant the male would not venture too far off and he would most probably try and find her.

So the cat and mouse game began! A great test of our tracking skills. When we arrived at the last seen spot of the male Leopard, we looked for any signs he might have left behind in order for us to get a direction of movement. We found some tracks moving in a westerly direction. Unfortunately for us, there are a variety of different roads to maneuverer  and it was a difficult decision to pick one. That is when the art of tracking comes into play! Tracking is not always purely about looking and following the tracks. There is so much more to it. Things like: Listening for sounds and alarm calls. The different kind of birds that can indicate an animal close by or understand the animal behaviour, or even placing yourself in the animal’s position to figure out where he would have disappeared to. These are all factors that you can use when searching for an animal in the African bushveld.

Knowing the reserve, I knew there was a nice small drainage line with a lot of shade and trees where Leopards have been known to hang out and keep cool from the hot sun. After a few rounds of stopping… listening… looking, stopping… listening…looking, eventually, we came across some fresh tracks heading straight into the drainage line. The tracks were too small to be the male Leopard, I had first seen on my way to Camp, it must have been the female. As we rounded the corner, the road split and I needed to make the right decision. Which way should I go?  With a decision made, we drove not even 200m along the road, when there, right before us was a small female Leopard sleeping inside the small of a tree, the branch just big enough for her to lie on. 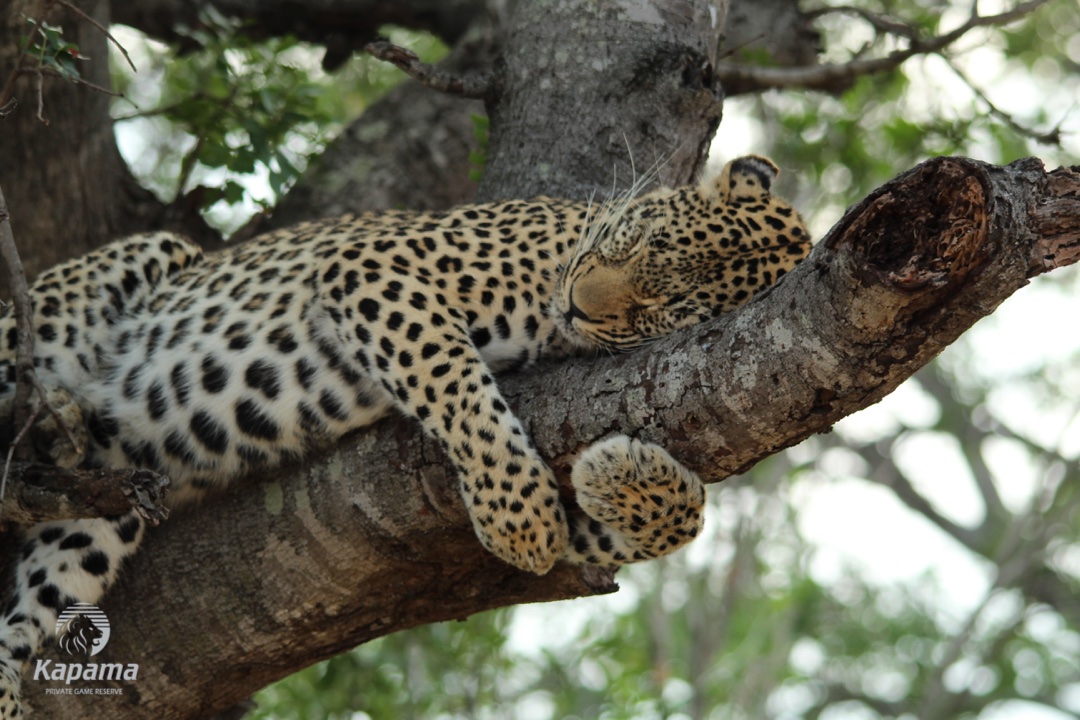 What a view!  We had a perfect vantage point of her, in direct line of sight. She seemed so relaxed with us being there, not even lifting her head up to see what we were doing. This gave us all the perfect opportunity to take some amazing photos of her. After a couple of minutes, she started to yawn. With cats, when they start to yawn it is the first sign they are going to get active, followed by stretching of the back and forelimbs. After all the yawning and stretching she sat up straight, giving us a perfect shot of her just before she jumped down and slowly walked away from us into the thick lush bush. We left her in peace, with ample time to find other animals in the African bushveld before sunset. What an amazing game drive this was? Not just seeing a wonderful Leopard sighting, of her sleeping in a tree, but of the entire experience of tracking her down.

My guests loved the first-hand experience of an actual animal tracking, to be topped off with the reward of being able to find her.