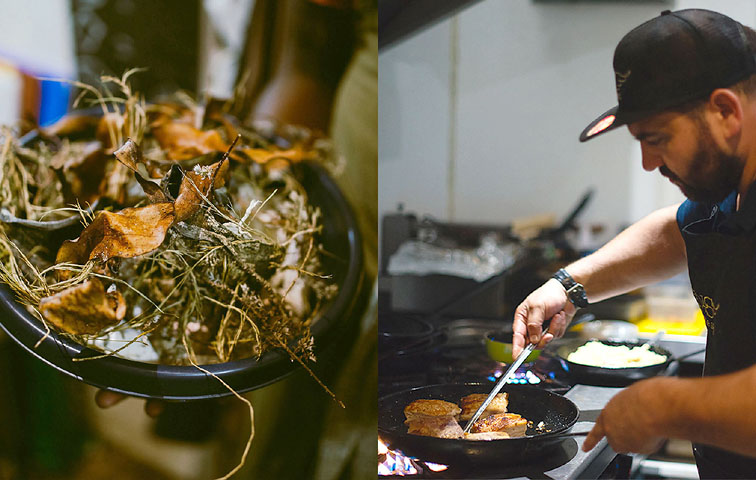 While growing up, Santi’s nickname was Santiño which means Little Saint and this formed the inspiration for his Bree Street restaurant that was founded around principles of goodness, freshness and deliciousness. The restaurant has subsequently closed down, only to be replaced by an intimate Chef’s Table, hosted by Santi and his wife, Dominique, in a stylish inner-city loft-style space. Santi hails from Galicia in Spain but spent his teenage years growing up in London (hence the rather thick English accent). He started at the bottom of the chain in the restaurant world – washing dishes and slowly worked his way up.  His career spans from being a Chef – winning a Michelin star for the kitchen he headed up – through to the business world of real estate in London. Chef Santi Louzán is the perfect Chef to host a Chef’s table – he is warm, welcoming, creative, a showman and totally charismatic.

Santi’s cooking draws its inspiration from his childhood – he was surrounded by artisans and family members who were farmers and fisherman. Internationally trained Chef Santi grew up knowing food made only from the freshest produce and seasonal finds, and it is on this foundation that his Chef’s Table is based. His menu is carefully curated as the season brings in its new produce.

Santi’s Chef’s Table Cape Town is a shared social table concept where he prepares and plates a 7-course dinner in front of you.   Santi introduces each course and shares the story of the inspiration behind each, and the idea is to tweak the menu based on the seasonality of ingredients. Each course is paired with a matching wine (5 different wines will be served with dinner) and he can cater to picky dietary requirements with advance notice.