The African bush, in the early morning, holds something beyond the crisp air and radiant sunrises. There is something else, and it is this ‘something else’ that captivates me the most. It is that feeling of mystery and surprise. You never know what the morning may bring and no matter how hard you and your tracker try to find something, if it doesn’t want to be found, it won’t.

For months my tracker and I had been searching for a female leopard and her newborn spotted fuzz ball. This elusive creature had evaded us by lying, walking, sleeping and eating in all the wrong places, at all the wrong times. I was desperate to have the privilege of meeting mother and daughter before the youngster stepped out of cub hood.  Every morning and afternoon as I left for my game drive, I had a secret hope that perhaps today would be the day. Perhaps today we would find the tracks which would lead us to this secretive leopardess and her cub.

Little did we know that today would be the day. This morning the story was perfectly written and all we had to do was listen…

Not long after leaving the lodge, a call came over the radio that this female had been found in a large Marula tree with a warthog kill and her cub was nearby. I could barely contain my excitement and enthusiasm. With the biggest grin, I turned to my guests and told them that today was the day! As we made our way to the sighting our excitement was tangible. We were all on the edge of our seats, unable to voice our hopes, let alone really think them.

As we came around the corner, there silhouetted in a big Marula tree, was the leopardess with her kill slung across a branch. 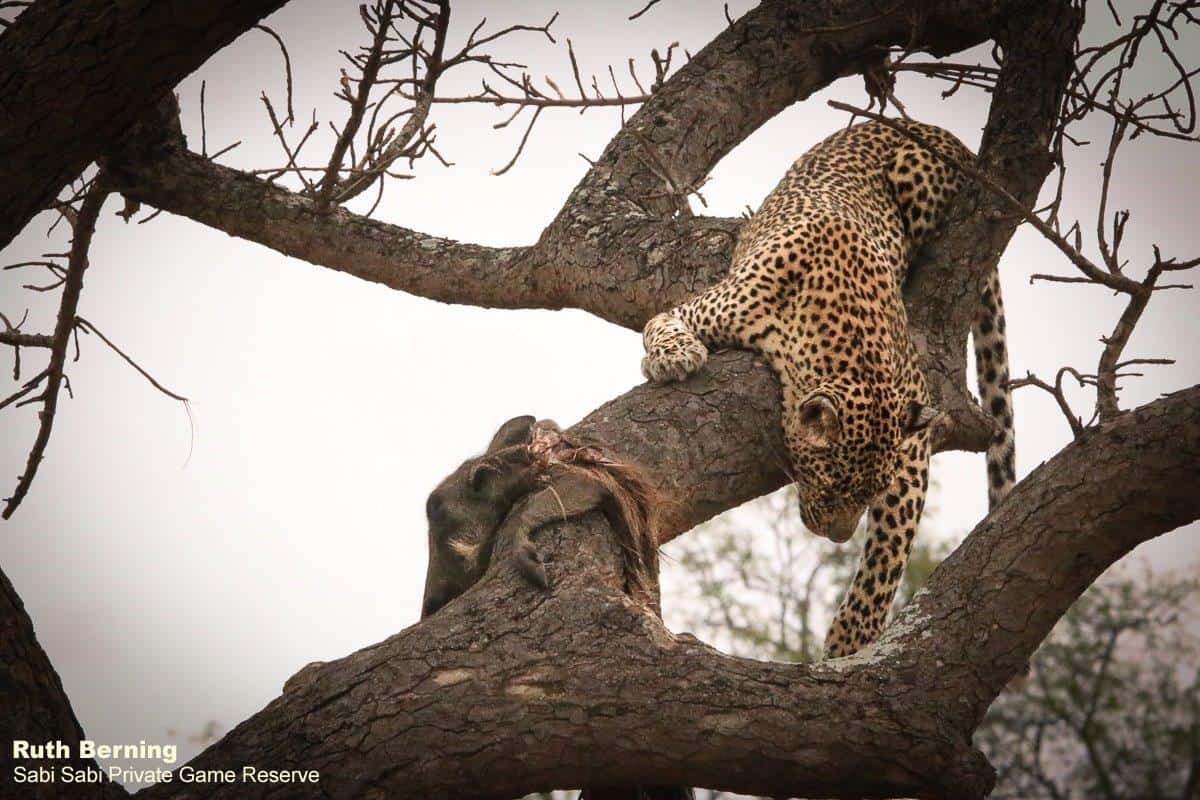 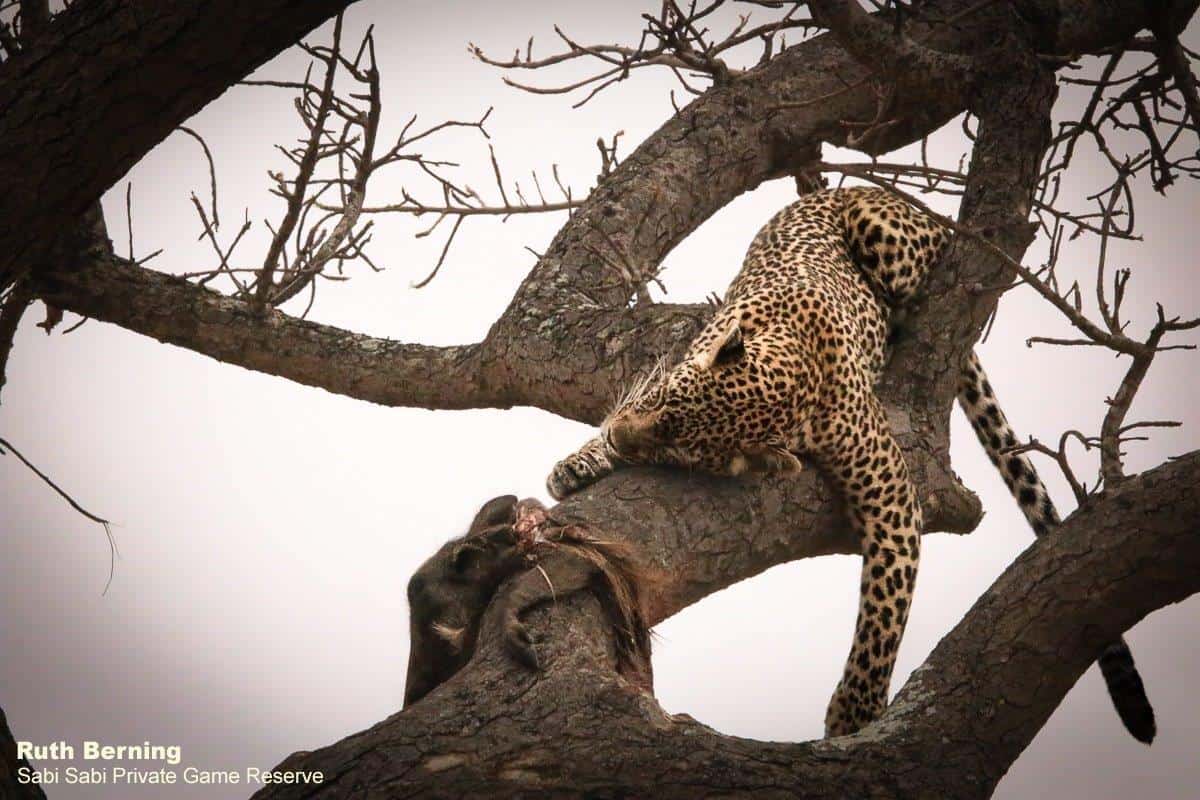 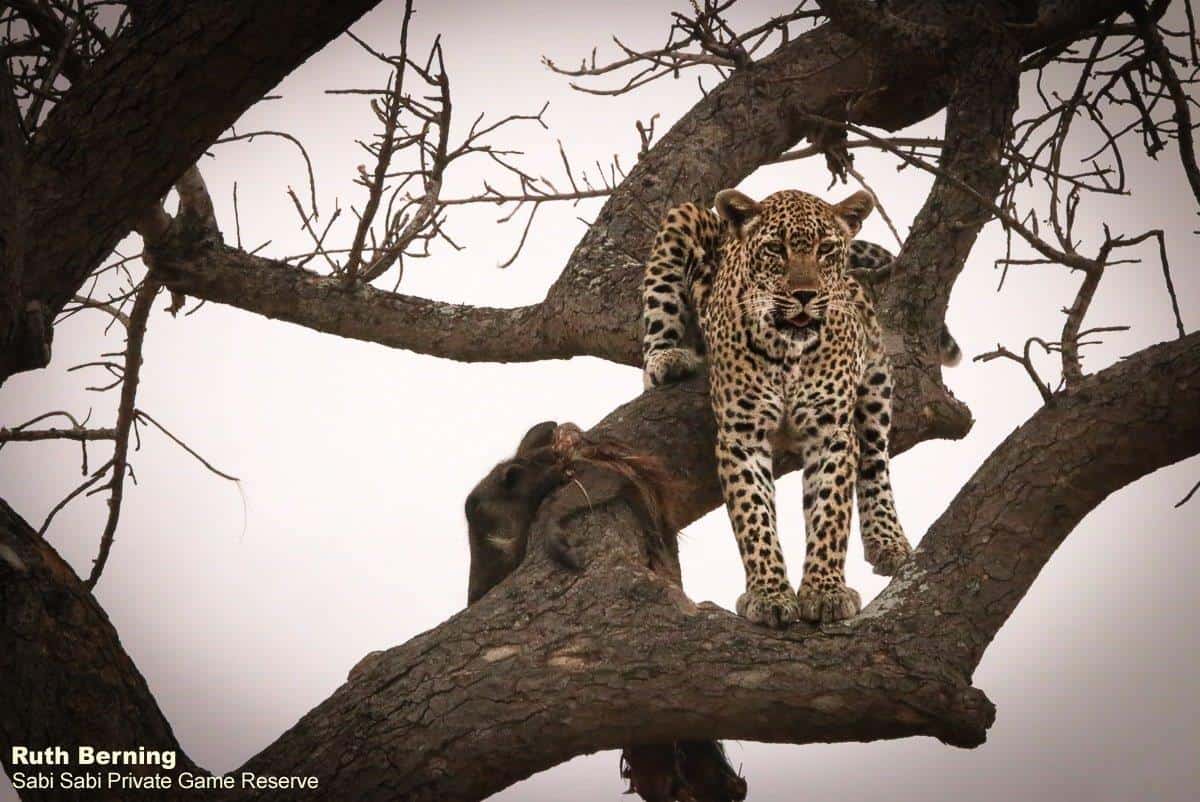 Our eyes quickly noted her elegance but just as quickly we found ourselves scanning the area for her cub. I couldn’t see it anywhere. My eyes skimmed the base of the surrounding trees and there nestled at the base of a very flimsy Russet Bushwillow tree lounged a large hyena. It watched us as we drove a little closer. My heart was in my mouth. Where was this little spotted animal… and then the bush above the hyena juddered a little and, grabbing my binoculars, I spied a little spotted animal perched in the branches beautifully camouflaged, its eyes wide and wondering. This was the first leopard cub I had ever laid eyes on and I could barely contain my excitement. Every little detail was there, although somewhat hidden behind bits of scraggly bush, but perfect detail nonetheless. 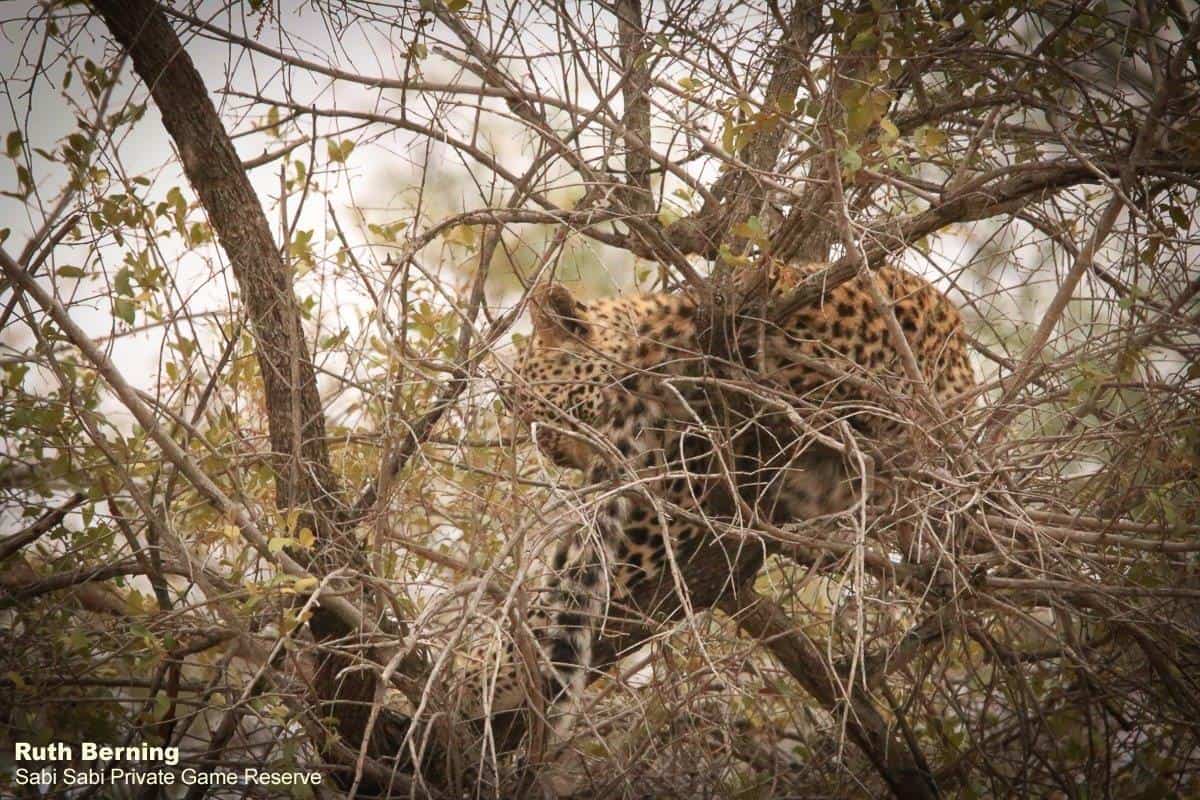 We all sat there. The mother leopard seemed highly unperturbed by the hyena’s presence lying in ambush below her daughter. She appeared more concerned in finding the best position to be close to her kill and being as comfortable as possible. She kept having to rearrange her limbs in a new and intriguing manner. We sat there in awe, noting their velvet spotted coats, perfect whiskers, and the beautiful necklace of black pearls so attractively displayed around the mature neckline of the old female. As we sat there, the hyena lifted its head, raised its leering grin into the air, sniffed, and then hauled itself up off the ground somewhat unenthusiastically. 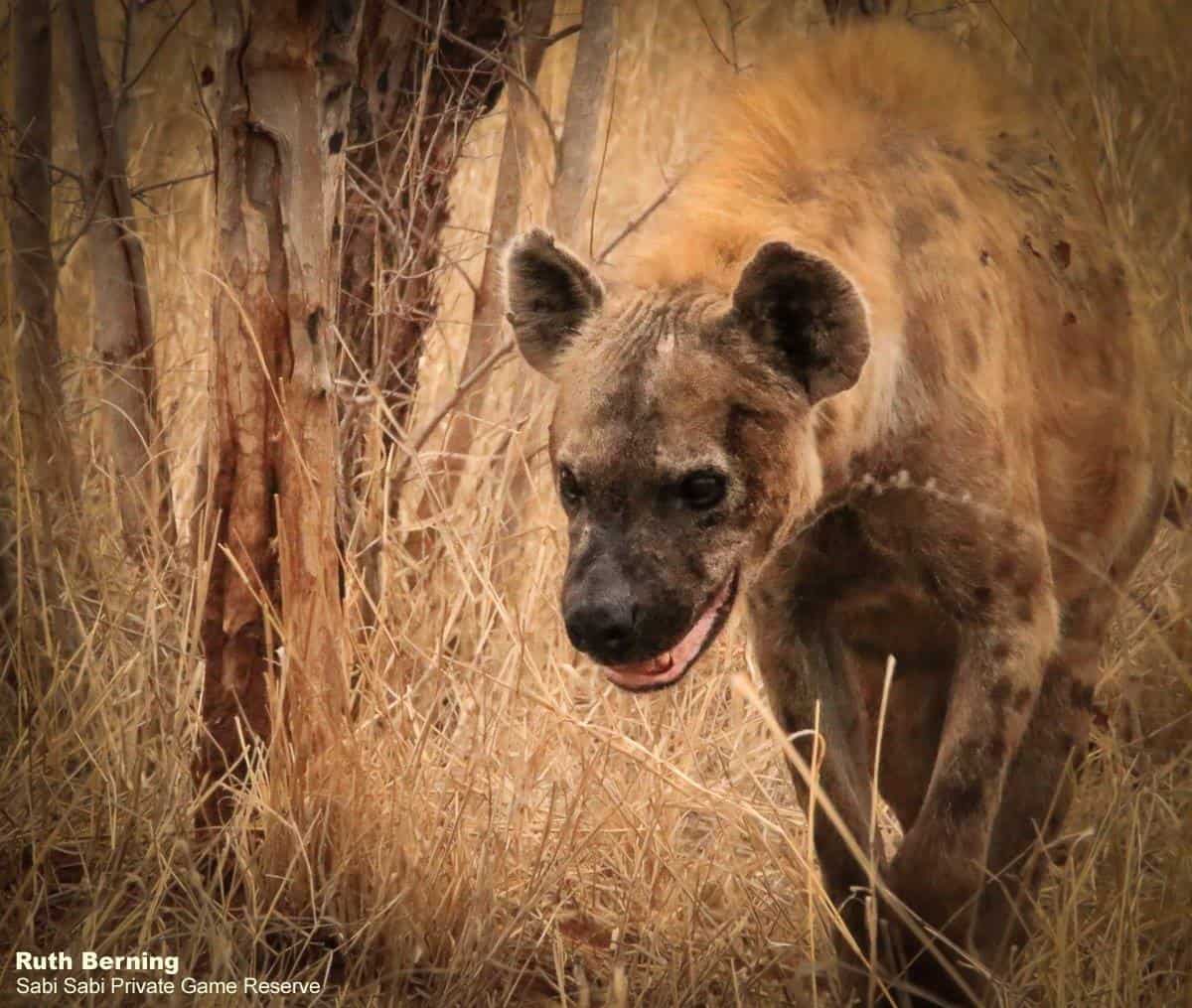 We anxiously watched with bated breath as the hyena gave us, the mother leopard, and then the little cub, who was precariously balanced at the top of her tree, a withering look before sauntering away into the bush obviously tired of waiting. We didn’t have to wait long for the elegantly spotted cat to gracefully disembark from the large Marula tree, calling out to her cub. 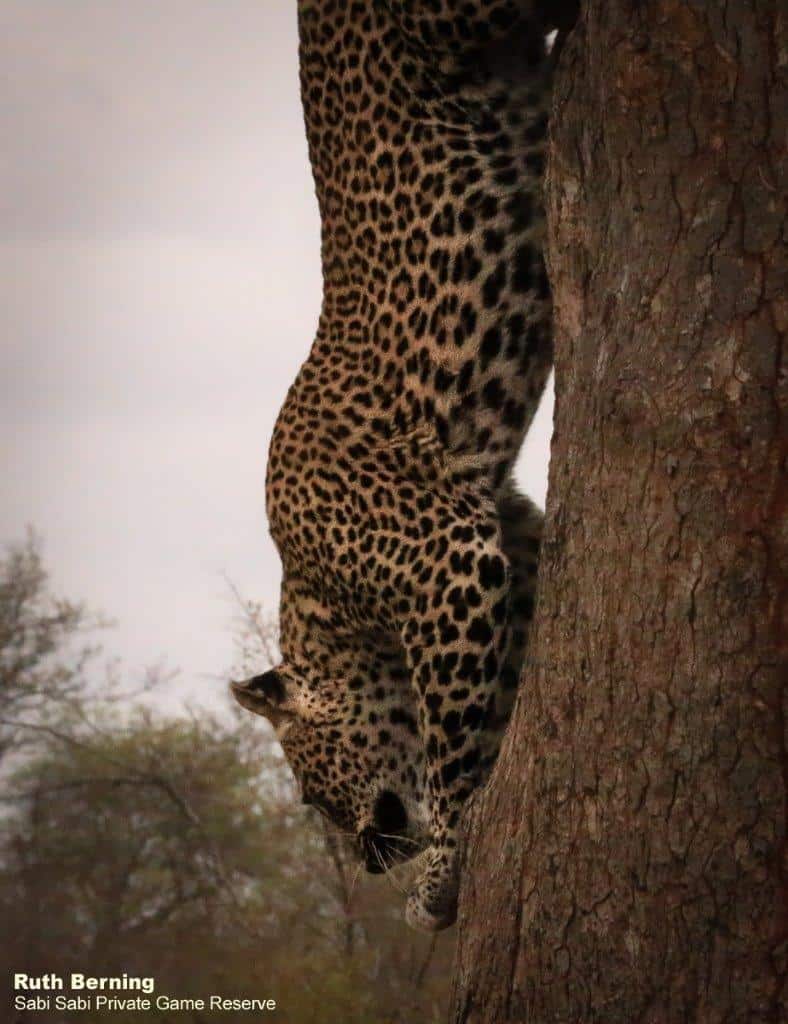 The cub looked at her mother as if to say, “You have got to be crazy.” Her mother reassuringly called her, encouraging her to become untangled from the little Bushwillow. Eventually, one leg at a time, the cub cautiously picked her way through the miss-match of branches, until at last, she was on firm ground. 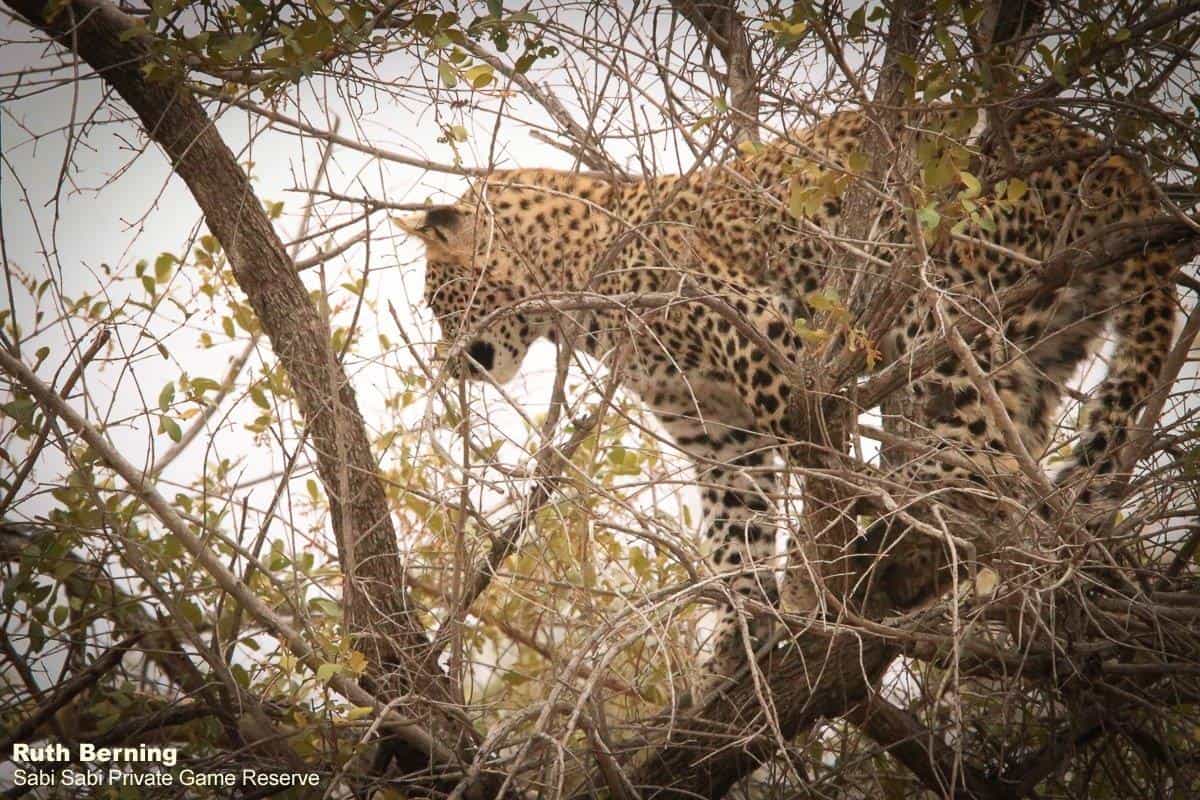 She gave a little call and then bounded over to her mother. She rubbed herself against her mother’s warm coat, nestling under her chin, she wound her tail round her neck and begrudgingly allowed her mother to groom her. 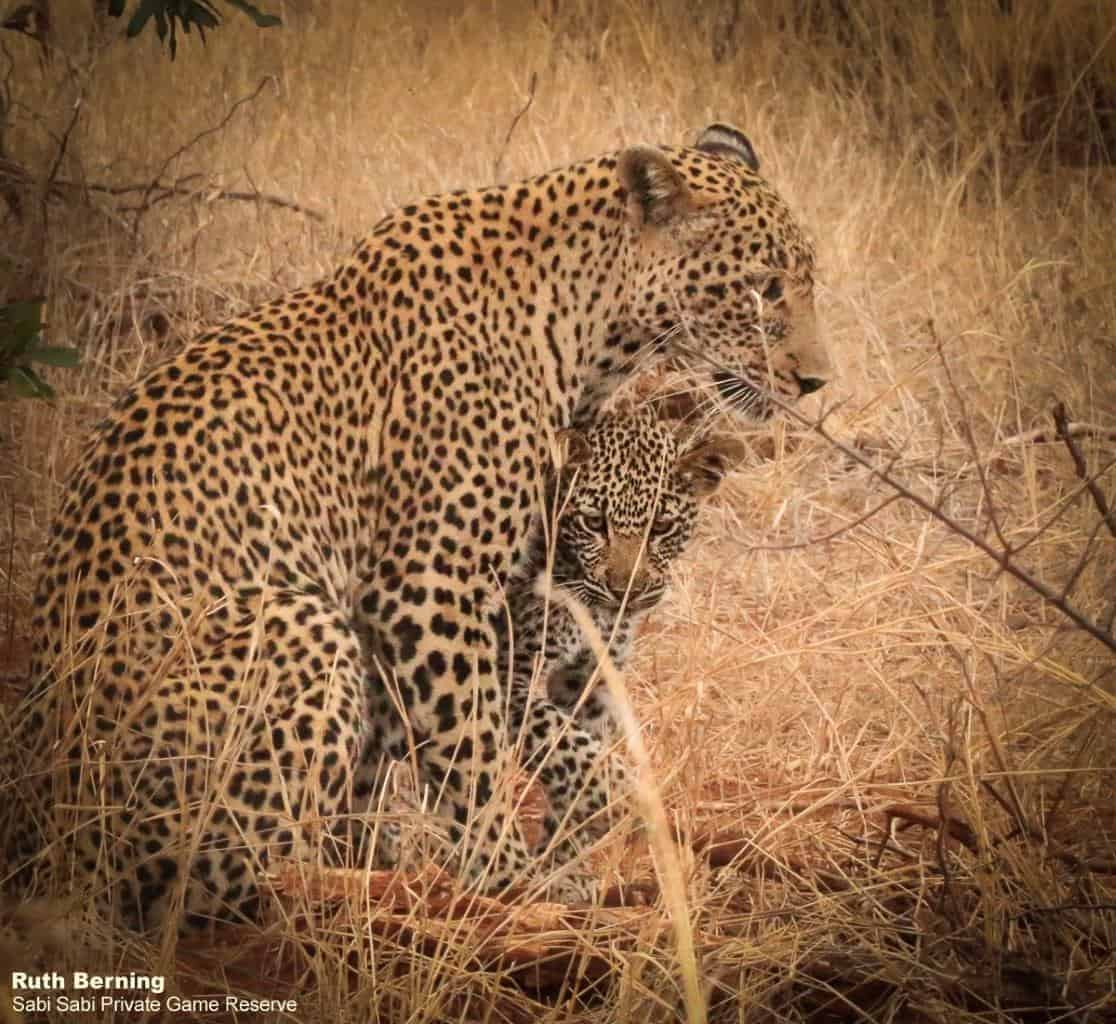 After a few minutes, the two got up and set off through the bush. The female leopard walked on ahead while her little cub picked her way through the long grass, scooting round boulders and trotting to keep up. They paraded through the grass until they got to a smooth dust road winding through the bush. Mother and daughter walked down the road, side by side, their padded feet barely leaving a trace of their presence behind them. We followed them, always making sure to give them plenty of space. The cub’s mother was at ease and in her element. The little cub, however, would regularly turn and give us a quizzical look before dashing off into the grass on the side of the road only to reappear a few moments later back beside her mother as if nothing had happened.

We stopped a little way away from them and watched as the spotted mother sniffed the air and then turned decisively off into the thick bush. The little one hesitated briefly, giving us one last side long glance, before scurrying off after her mother. We sat there and watched as their rosettes disappeared into the brown grass, until, quite frankly, we had no idea where they had gone. 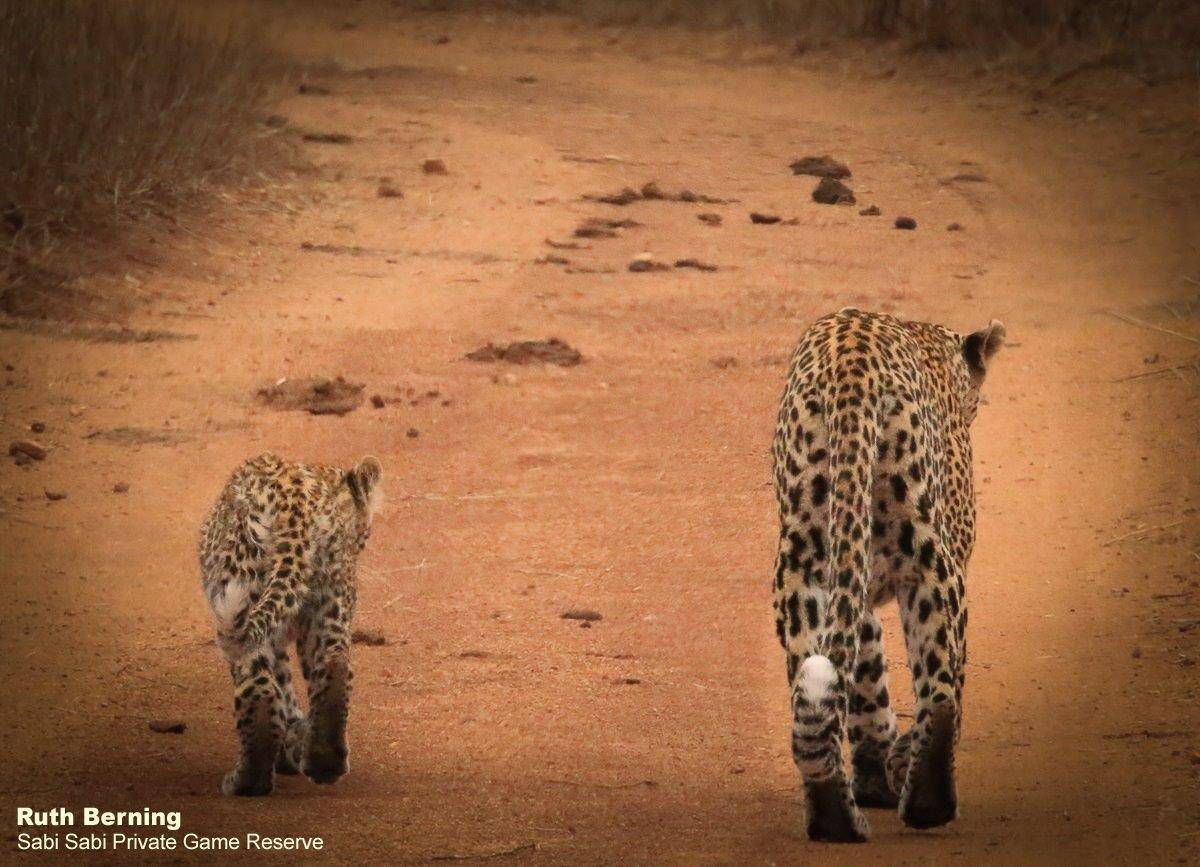 It was a morning that we would never forget. As we made our way back to the lodge, this fluffy little girl with wide inquisitive, cautious eyes, fresh little whiskers and a soft curious little nose would forever be etched in my mind. Every little detail of this little character who belonged to the little white tipped tail that dodged its way through the long grass would remain in my memory forever…